World Water Day was created in 1993 and is coordinated by UN Water—the United Nation’s branch concerning all issues related to freshwater. The day is meant to spread awareness about freshwater and to encourage actions to ensure safe water for everyone—including fish! Here at Newport Aquarium, water is a huge part of what we do. In fact, Newport Aquarium has more than one million gallons of water here in the tanks! When guests visit, they learn about the important role they play in conservation and helping keep our water clean. They’ll also learn what we can do to help preserve our most precious resource – water. Below, take a behind-the-scenes look at how we make that water safe for our marine animals. Or visit Newport Aquarium, by purchasing a ticket today at: https://www.newportaquarium.com/ Water Recipes from around the World One million gallons is a lot of water! And our animals can’t just live in any old water. According to Cameo VonStrohe, Water Quality Specialist at Newport Aquarium, “It really is ‘world water’ here at the aquarium. We have animals from all over the world, so we have to mimic water from all over the world!” 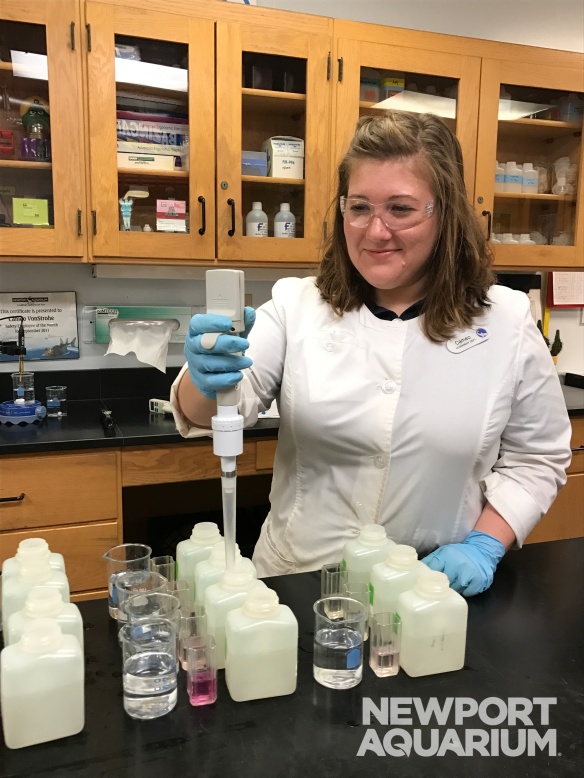 Water Quality Specialist Cameo VonStrohe started at Newport Aquarium as an intern in 1999, while studying biology with a minor in chemistry at NKU. She didn’t always know she wanted to work in the water lab of an aquarium—although animals were always part of the equation! She first dreamed of becoming a veterinarian, but eventually discovered that she loved the laboratory.

How do we do this? It’s a process! First, when the city water comes in, it gets filtered through carbon to take out things we don’t want in our water—chemicals that are added for people, like fluoride and chlorine. Then we break out our water “recipes” to match each aquatic environment that our animals represent. Our biologists and engineers make our saltwater using a unique recipe that includes sodium chloride (better known as table salt!) and nine other salts. Filtration systems and weekly testing keep the water clean and safe for both animals and divers. Testing the Waters VonStrohe tests water from all of the tanks at the aquarium in the Water Quality Laboratory at least once a week. She conducts what she calls a “full run” of four tests on each water sample:  salinity, pH, ammonia, and nitrite. 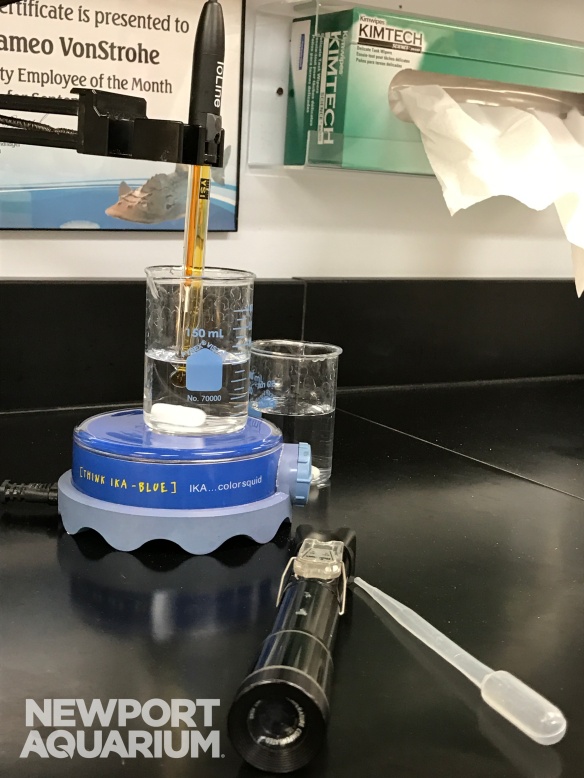 To test for salinity—the amount of salt in the water—VonStrohe uses an instrument called a refractometer, which looks like a small telescope and uses light and a tiny scale inside to measure the amount of salt in each water sample. pH testing measures how acidic or basic a water sample is. VonStrohe uses the results of the tests to adjust the tanks to suit each animal.

The goals for each test vary by tank, because each tank simulates a different aquatic environment from around the world. For example, the big 385,000 gallon saltwater shark tank has salinity levels mimicking the ocean, and requires a pH of above 8. But in the Shore Gallery, the water is brackish, meaning it’s a mixture of fresh and saltwater. In nature, the nitrogen cycle transforms toxic ammonia created from animal waste to nitrite and then to nitrate thanks to the help of some good bacteria. “Everyone thinks bacteria are so horrible,” VonStrohe said, “but they are actually essential to keeping animals healthy!” 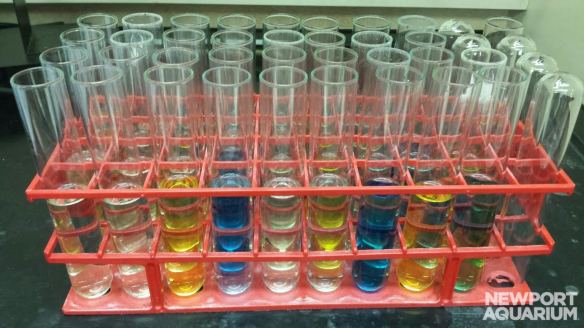 Ammonia is created naturally by animals, but it’s toxic to them. The water samples in these test tubes turn different colors depending on their ammonia levels. VonStrohe uses these results to adjust the water going into the tanks.

In an aquarium, this cycle is helped along by people like VonStrohe and machines like the shark tank’s denitrification unit. This machine has three big tubs where tank water is cycled through different chemical reactions that eat up nitrites. Then the machine returns the water to safe levels before sending it back into the tank. 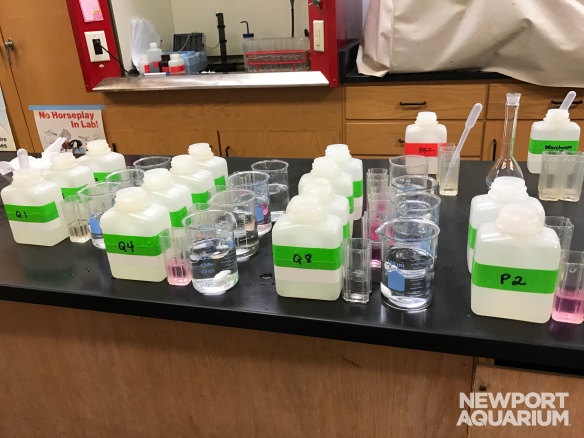 VonStrohe conducts four different tests on water samples from all of the aquarium’s tanks each week. One of these is to test for nitrite in the water. “The more pink the sample turns, the more nitrite is present!” she said.

Sometimes, VonStrohe performs more involved testing on the water. Microbiology tests check for tiny organisms and bacteria, and a machine called the atomic absorption spectrometer uses an open flame and beams of light to measure the levels of certain elements in the water. 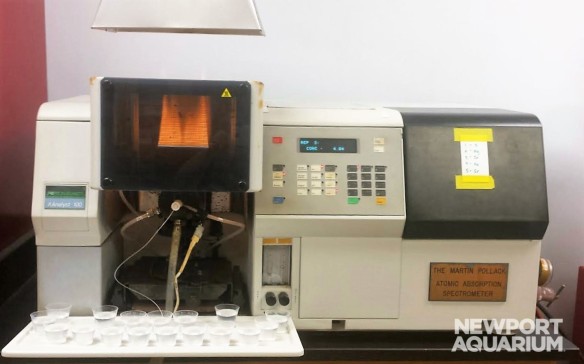 This atomic absorption spectrometer uses light and an open flame to measure the levels of elements in the water samples. VonStrohe likes to tell people that this is the same type of machine that is used on crime shows like NCIS!

World Water all year round Here at Newport Aquarium, it’s World Water Day every day of the year! A lot of behind-the-scenes water testing, filtering, and cleaning is done by our dedicated staff to ensure our aquatic friends from around the world feel right at home here in Newport, Kentucky. 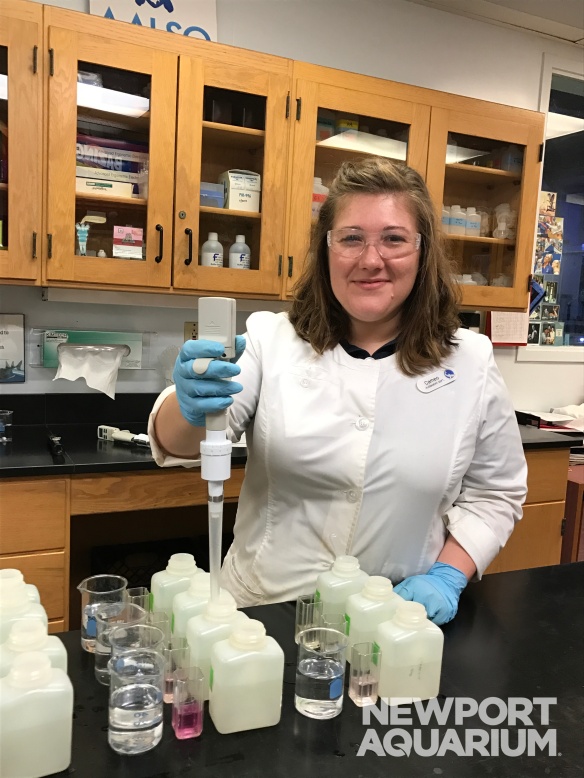 All of our water is filtered with carbon and specially made using a recipe of salts to match water environments from around the world!